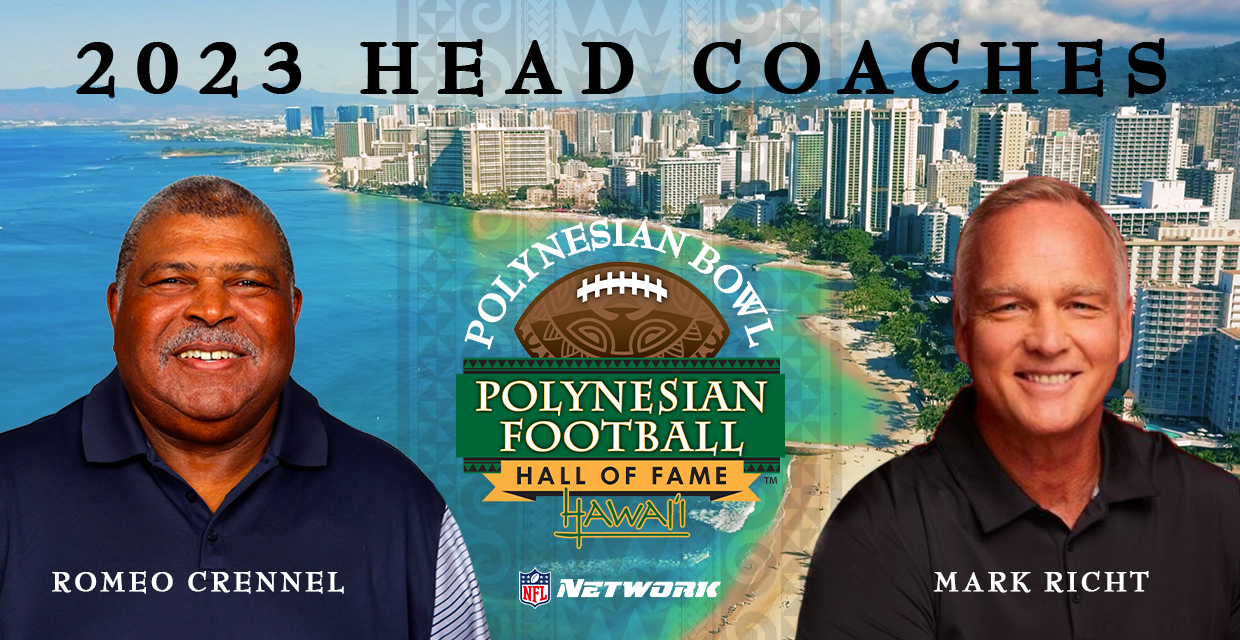 Romeo Crennel will serve as Head Coach for Team Mauka (Mountain). Crennel coached for 50 years (39 years in the NFL) and is considered to be one of the most-decorated assistant coaches in league history. He was a part of 17 playoff appearances and won five of the six Super Bowls his teams appeared in, including Super Bowls XXI and XXV with the Giants, and Super Bowls XXXVI, XXXVIII and XXXIX with the Patriots. During his career he was a head coach for five seasons, first with the Cleveland Browns and then with the Kansas City Chiefs.

“It is a genuine honor to be selected as a Polynesian Bowl Head Coach,” said Romeo Crennel. “I’m excited to not only coach these top athletes, but also learn about the Polynesian Culture.”

“The 2023 Polyensian Bowl is going to be an amazing experience,” said Mark Richt. “I look forward to celebrating culture and coaching the nation’s best players in paradise.”

The Polynesian Bowl is a premier all-star game played annually in Honolulu, Hawai‘i that features 100 of the nation’s top ranked high school seniors of Polynesian and non-Polynesian ancestry alike – many whom have gone on to play in the NFL. The game has become the most sought-after all-star football invitation – a rapid rise from its inaugural game in 2017. This past January, top ranked 2022 player Travis Hunter participated in the game and was named Offensive MVP. Major partners include Microsoft Surface Pro, adidas, BodyArmor, Riddell, CrossCountry Mortgage, Friends of Hawai'i Charities, Hawaiian Airlines, HBCTC, Hawaii News Now and World Wide Safety. For more information, go to PolynesianBowl.com.

ABOUT POLYNESIAN FOOTBALL HALL OF FAME

The Polynesian Football Hall of Fame honors Polynesia’s greatest players, coaches, and contributors. Its permanent home is located at the Polynesian Cultural Center (Laie, Hawai'i) and was established in 2013 by Super Bowl Champions Jesse Sapolu and Ma’a Tanuvasa. Other board members include Troy Polamalu, Vai Sikahema, June Jones and Reno Mahe. There are currently 40 inductees. The Polynesian Football Hall of Fame has provided over $300,000 in college scholarships to date. For more information, go to PolynesianFootballHOF.org.