POLYNESIAN BOWL TO BE BROADCAST LIVE IN PRIMETIME ON NFL NETWORK 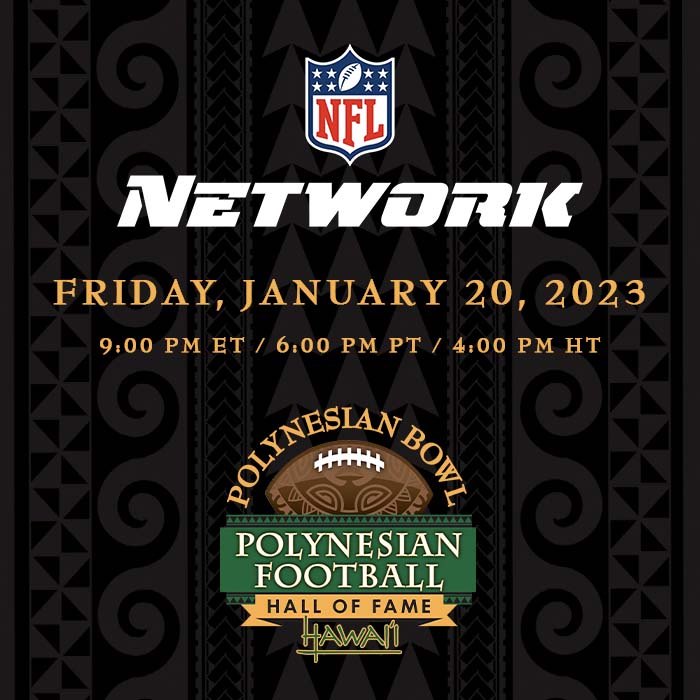 “This is a significant milestone and recognition for the Polynesian community to have the Polynesian Bowl broadcast live in primetime on NFL Network,” said San Francisco 49ers four-time Super Bowl Champion Jesse Sapolu, chairman & co-founder of the Polynesian Football Hall of Fame. “We thank Commissioner Goodell and the National Football League owners for their commitment to sharing our culture. It’s Friday night football in Hawai’i!”

“We are excited to broadcast the Polynesian Bowl exclusively on NFL Network,” said Mark Quenzel, NFL Senior Vice President, Head of Content. “The impact of the Polynesian community throughout the National Football League is profound and extensive, and we look forward to providing a platform for the next generation of Polynesian talent to showcase their skills and talent.”

Polynesians represent less than half of 1% of the U.S. population yet continue to make an outsized impact on the NFL. About 70 Polynesian players are currently on NFL rosters such as DeForest Buckner, Talanoa Hufanga, Marcus Mariota, Jordan Mailata, Jordan Poyer, JuJu Smith-Schuster, Penei Sewell, Ronnie Stanley, Tua Tagovailoa, Vita Vea and Zach Wilson. Legends Junior Seau, Kevin Mawae and Troy Polamalu have been enshrined into the Pro Football Hall of Fame.

The Polynesian Bowl is a premier all-star game played annually in Honolulu, Hawai‘i that features 100 of the nation’s top ranked high school seniors of Polynesian and non-Polynesian ancestry alike – many whom have gone on to play in the NFL. The game has become the most sought-after all-star football invitation – a rapid rise from its inaugural game in 2017. This past January, top ranked 2022 player Travis Hunter participated in the game and was named Offensive MVP. Major partners include Microsoft Surface Pro, adidas, BodyArmor, Riddell, CrossCountry Mortgage, Friends of Hawai'i Charities, Hawaiian Airlines, HBCTC and Hawaii News Now.

“From its inception, Honolulu has been proud and honored to be the host city of this signature event featuring many of the finest high school football players in the country. The Polynesian Bowl signifies the excellence and powerful impact Polynesians continue to contribute to modern day football at every level of play!” said City and County of Honolulu Mayor Rick Blangiardi.

ABOUT POLYNESIAN FOOTBALL HALL OF FAME

The Polynesian Football Hall of Fame honors Polynesia’s greatest players, coaches, and contributors. Its permanent home is located at the Polynesian Cultural Center (Laie, Hawai'i) and was established in 2013 by Super Bowl Champions Jesse Sapolu and Ma’a Tanuvasa. Other board members include Troy Polamalu, Vai Sikahema, June Jones and Reno Mahe. There are currently 40 inductees. The Polynesian Football Hall of Fame has provided over $300,000 in college scholarships to date. For more information, go to PolynesianFootballHOF.org or PolynesianBowl.com.

For fans on the go, all NFL Network programming can be streamed live through the NFL app and NFL Network app on smartphones, tablets, PCs and connected TV devices (Amazon Fire TV, Android TV, Apple TV, PlayStation 4, Roku and Xbox One). Access is available for NFL Network subscribers of participating TV providers. For more information, go to NFL.com/nflnetwork.